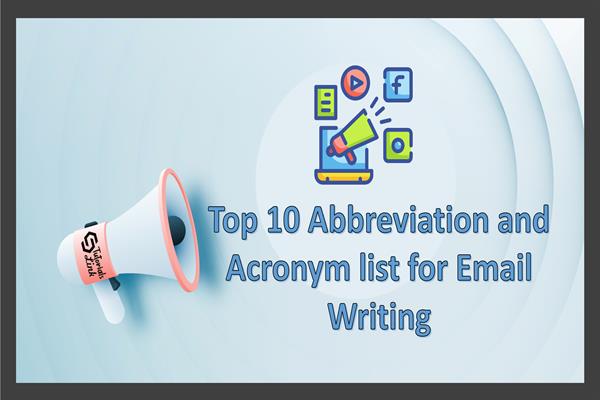 In today’s time writing lots of emails is new normal but at the same time if have beautiful writing skills that can power-up your emails and can help you win many business deals or the trust of your managers.

If you a sales or marketing person and use to write lots of emails every day, trust me this article will help you a lot to write next business email very short and clear with the list of Top 10 Abbreviation and Acronyms.

Let’s start and understand one by one:

What does CC mean in email?

In sending an email, CC is the abbreviation for “carbon copy.” In the Past before the internet or email, we use to write a copy of the letter you were writing, we must place carbon paper between the one you were writing on and the paper that was going to be your copy of the above original letter.

Just like the physical carbon copy above, CC is an easy way to send copies of an email to other people.

What does the BCC mean in email?

BCC is the abbreviation for “blind carbon copy.” Same as the CC, BCC is also a way of sending copies of an email to other people. The difference between CC and BCC is that, while you can see a list of recipients when CC is used but that’s not in the case of BCC. As It’s called blind carbon copy because the other peoples in the email won’t be able to see that someone else has been sent a copy of the email.

ASAP stands for "As Soon As Possible"

This abbreviation is used to assert the emergence. It could be drawing focus to the completion of a task in a short period or could emphasize be leveling up the task’s priority. It is usually spoken in the form of Acronym such as "Deliver the product to my place, ASAP". It is also a popular chat abbreviation commonly used in online communication such as e-mail, online chat, and instant messaging.

AMA stands for "Ask Me Anything"

This abbreviation generally stands for Ask Me Anything. It is a chat topic or general discussion forum thread. Users can ask the OP (Original Poster) questions relating to a specific aspect of their life, fame, or career. The term AMA has been in usage since the 1990s. Its origins began in an AOL chatroom. As the chatroom was placed in a romance category, the questions were of a sexual nature. Since Reddit opened in 2005, AMA lost its sexual tones and became more popular because of a subreddit dedicated to the topic.

TL;DR stands for "Too Long that’s why Didn’t Read"

This abbreviation is mostly used on various social media platforms. When a sender is using this term, so she is trying to imply that the material was way too long for her to give it a read. So, it is used in the most literal meaning, “it was too long, I did not read it whole.”

This term has a dismissive tone for lengthy material. This term was first used in 2002 in the first-person sense.

DGMW stands for "Don’t Get Me Wrong".

This abbreviation is commonly used on various social media platforms. When a sender is using this term so by that she is implying that the statement may sound rude or kind of straight-forward, but she is saying this for the benefit of the recipient.

For example: “I may sound rude but DGMW, you need to improve your interview skills.”

This term is used especially where there is a chance for the recipient to get offended by the act of the sender.

This abbreviation has been used over the internet quite a few times now. Internet users put up stories or posts to have interactions with their followers on various social media platforms.

This term is not only restricted to social media platforms, but it is also used in various magazines and in interviews as well.

Where to use this "FAQ" term?

Imagine two people having the conversation:

Ella: Mike jotted down a few FAQs picked up from the survey and he will be addressing it to the upcoming celeb.

FKA stands for "Formerly Known As".

What does FKA mean?

This abbreviation is commonly used on various social media platforms. When a sender is using this term so by that she trying to imply that the subject has changed his current name or position and now he is called by the new chosen name or position.

For example: “Dilip Kumar FKA Yousuf Khan is a big movie star of all times.”

FYI stands for “For Your Information”

FYI is a truncation of "For Your Information". It is a typical web slang utilized these days on internet talking. It is additionally utilized while offering data to associates or companions through email or printed paper. indicates a circumstance where one individual needs to offer data to another individual. The data given utilizes? FYI? doesn't request a prompt activity, it is extra data to enhance the principle message or data.

EOD is also known as "End of the Day"

EOD represents End of the Day. It focuses on the furthest limit of an exchanging day monetary business sectors, the point in time when the exchanging stops for the afternoon. It is otherwise called end of business, close of business, and close of play.

These couple of moments preceding the real finish of the day are expected to finish the normal assignments that are needed to easily end the exchanging or business day.

AFAIK stands for “As Far As I Know”.

There is a variant AFAICT “As Far As I Can Tell”;

This abbreviation is popularly used on various social media platforms. This term is used when the sender does not have a proper or whole idea about the subject, and according to the half-knowledge he is trying to make sense. So, the sender is implying that he is sharing his perspective that is correct according to him but still doesn’t have accurate information to generate the complete sense.

It has the same meaning as IIRC that is If I Recall Correctly.

Please check all of the above Acronyms in the details with the below references:

How can we secure our Incognito Tab using Face Id?
HOW TO MESSAGE SOMEONE ON YOUTUBE?
How to open a full play store on google tv?
What are DOLBY HEADPHONES?
How to update the VLC MEDIA PLAYER?
How to create attractive YouTube shorts?
How can we run multiple applications on our devices at once?
What should we do if we are unable to receive emails from Gmail?