Progamming In Python For Beginners

Through this article, we will start learning about this highly demandable language. This will help the absolute beginners to know about the basics of the python,  i.e why python is taken over the other programming languages like C, C++, Java, etc. So, let’s start this journey.

Topics to be covered here will be:

Python is a robust and elegant programming language. It is a high-level, Object Oriented, a general-purpose programming language with dynamic semantics. It is very simple, easy to learn syntax emphasizes readability and therefore reduces the cost of program maintenance. It supports various Modules and packages, which encourages modularity and code reuse.

ORIGIN OF PYTHON AND ITS VERSION

Python was conceived in the late 1980s by Guido van Rossum at Centrum Wiskunde & Informatica (CWI) in the Netherlands as a successor to the ABC language (itself inspired by SETL), capable of exception handling and interfacing with the Amoeba operating system. Its implementation began in December 1989.

Python 3.0, released in 2008, was a major revision of the language that is not completely backward-compatible, and much Python 2 code does not run unmodified on Python 3.

The Python 2 language was officially discontinued in 2020 (first planned for 2015), and "Python 2.7.18 is the last Python 2.7 release and therefore the last Python 2 release." No more security patches or other improvements will be released for it. With Python 2's end-of-life, only Python 3.5.x and later are supported.

Python interpreters are available for many operating systems. A global community of programmers develops and maintains CPython, an open-source reference implementation. A non-profit organization, the Python Software Foundation, manages and directs resources for Python and CPython development.

It's around 20 years, for many of us feels its new to the general software development industry,

So now let's start with understanding what are the features of python programming.

Before you start, you will need python on your computer. So, follow the instruction to download Python on your machine.

The file named python-3.7.4-amd64.exe should start downloading into your standard download folder. This file is about 30 Mb so it might take a while to download fully if you are on a slow internet connection.

4. If you want you can move this file to a more permanent location so that you can install Python (and reinstall it easily later, if necessary).

5. Start the Installing instructions directly below.

Ensure that the Install launcher for all users (recommended) and the Add Python 3.7 to PATH checkboxes at the bottom is checked.

If the Python Installer finds an earlier version of Python installed on your computer, the Install Now message may instead appear as Upgrade Now (and the checkboxes will not appear).

2. Highlight the Install Now (or Upgrade Now) message, and then click it.

When run, a User Account Control pop-up window may appear on your screen. I could not capture its image, but it asks, Do you want to allow this app to make changes to your device. 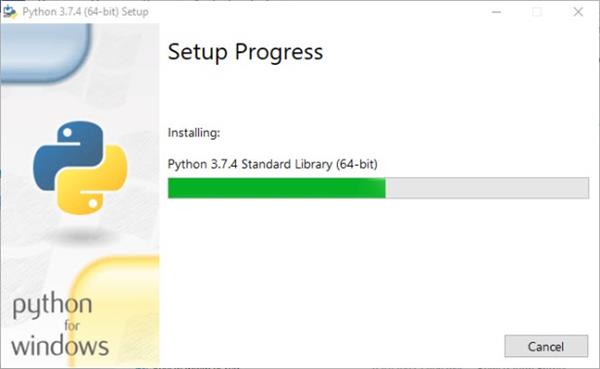 A new Python 3.7.4 (64-bit) Setup pop-up window will appear with a Setup Progress message and a progress bar.

During installation, it will show the various components it is installing and move the progress bar towards completion. Soon, a new Python 3.7.4 (64-bit) Setup pop-up window will appear with a Setup that successfully messaged. 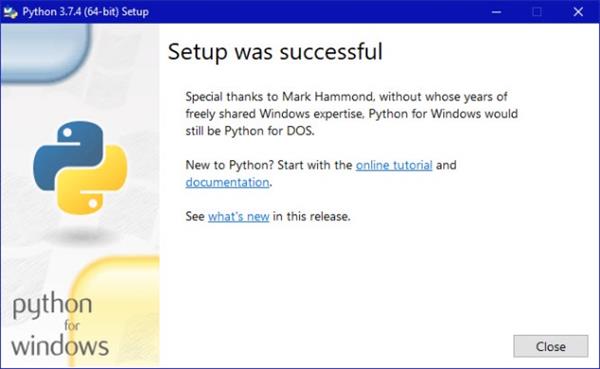 How to check whether Python is installed or not?

Till now, we have downloaded and installed python on our system now let's check whether the python is properly installed or not. To do so, follow the steps:

Now you can type “help”, “credits”,” license” for more information.

Or it will become a python prompt i.e you can enter single statements and get the result.

Command prompt can be used as a Python Prompt, But we will prefer using python IDE(Interpreted Development Environment) as they are designed for the developers to code and debug the program easily. Using python IDE  we can easily manage large code and achieve quick deployment.

There are many python IDE available some of the popular python IDE used are:

You can use any of the code editors according to your choice.

I hope, you enjoy this article. In upcoming articles, we will start learning the basics of Python Programming And will try to do interesting python projects too.