In the third quarter, China's PC shipments surged by 3% to over 15 million units 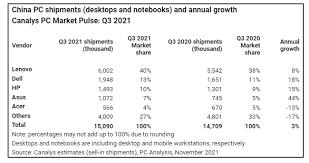 "Due to this rise, China had historic shipments in the third quarter, surpassing a year-old record of 14.7 million unit shipments in Q3 2020," the company stated. In 3Q21, sales of the top four manufacturers - Lenovo, Dell, HP, and Asus - rose year over year, indicating the influence of growing worldwide tech economies on the Chinese industry. With 6 million shipments and a 2% rise in market share, top-ranked Lenovo rose 8% year over year.

Dell and HP came in second and third place, accordingly, with 1.9 million and 1.4 million units delivered and market shares of 13% and 10%. In Q3, Dell's notebook sales hit new highs, while HP's desktop sales accelerated. Asus came in fourth with a 44 percent year-over-year increase, owing primarily to its laptop shipments. Acer remained in the leading five but was the only seller in the group to see a 15% drop in sales year over year.

Shipments have remained stable at 0.5 million units, close below local competitors Huawei and Acer. It maintained a good option to Lenovo for local authority buys, amid sluggish growth. According to the report, keeping this in mind smartphone companies are also planning to produce desktops to strengthen their business.