What is Networks in Cloud and Virtualization Concepts?

Feb 13, 2021 Cloud, Virtualization, Networks, VMware, 2631 Views
In This Article, we'll discuss What is Networks in Cloud and Virtualization Concepts?

What are Networks in Cloud and Virtualization Concepts?

A network connects computers, servers, and other devices to each other so they can communicate and transfer data. The data center network is a critical component of the data center.

In a data center, the programs, websites, and other applications that need to be delivered to consumers are kept in the data center storage. So, in order to deliver this data effectively and efficiently to consumers, the data center servers need to retrieve and access data from the storage and deliver it to customers in just a few seconds. This is why the network is so important for data center operations because businesses and individuals rely on that data to run applications, sell their products, run daily operations, and provide information to clients or customers. If the network goes down and data can no longer reach the users, it could cause a slowdown or halt in operations. However, an efficiently configured and managed network can help businesses and other entities stay competitive and reliable in today’s fast-paced world.

Unlike servers and storage whose functions are fairly easy to grasp because they are physical devices, networking is harder to envision because it is more abstract. This is because a network is a web of connected devices that talk to each other but the actual physical technology that allows this communication cannot be described as just one device. A data center network is made up of many hardware components such as cables, routers, and switches, to name a few, that create a ‘net’ of communication paths.

Connecting the servers and the storage to a network allows both servers and storage to communicate with each other as well as with other networks. In order for the data to transmit at fast speeds and maintain its integrity, it is important that a data center’s network is using efficient technology that is compatible with the devices that are trying to access it.

Note: When referring to a data center environment, instead of saying computer, we use the term server.

The first step to understanding how a network works is to identify the hardware involved and what role each piece of hardware plays in setting up the network. The following is a list of networking hardware covered in this section:

The role of these hardware components, simply put, is that the router and the switch create the network and the Ethernet cable and NIC allows the device to jump onto the network.

A network can have different layouts and ranges. In fact, it is the scope of the layout itself that identifies what type a network is. The type of network that normally uses Ethernet cables is called a LAN, short for local area network. This type of network is usually used in one location, such as an office, home, or school. Some Ethernet cables can reach hundreds of feet, but that distance is still considered local when you consider how big the internet is. There are other networks that reach further such as WANs (wide area networks) but linking up to a WAN usually requires renting access to a line that transmits data by wire, radio, or optic cables. Businesses that have multiple locations usually use a WAN. However, for the purpose of explaining networking within a data center, we will be focusing on LANs.

In order for the data to understand where it needs to go on the network, a network implements a protocol to direct the information to its destination. A protocol is a set of rules that dictates how information is exchanged between communication devices, in the case of a data center, between a server and a data storage device. These rules are like language. Only devices with similar protocols understand the rules of that language and therefore can transmit information (data) to each other. As with any set of rules, they need to be applied somehow, and in the case of data center networks, they are applied through the hardware mentioned above as well as through software.

The protocol most commonly used for a data center network is called TCP/IP. Transmission Control Protocol/ Internet Protocol (TCP/IP) is a program that computers use to send messages to each other. Like virtualization, a network communication protocol can be explained by breaking it down into different layers. The TCP layer of the program breaks the content of the message a computer sends into smaller bits of information called packets that are sent and received between computers. The IP layer of the message is the address of the computer the message is being sent to. Think of these two parts as a letter being sent in the mail. The address is written on the envelope, and the message is what is inside the envelope.

Every computer on the network has an IP address. In a traditional hardware-based data center, a network cable connects to a router, and the router then connects to a switch, which connects to the servers. As many servers as there are ports on the switch can be connected. The router itself is actually a small computer that stores the IP addresses for each IP network in its memory. When a signal comes into the router, the router reads the IP address and sends it to the correct port attached to the IP network where the destination computer is located.

Note: The layers of the TCP/IP protocol shown above are a summarized version of the entire network communication model called the OSI (Open Systems Interconnection) model. More information on networking communication standards and the OSI model can be found here.

On a network, the way in which the computers, servers, storage, and network hardware are arranged is referred to as the network topology. In other words, the topology is a map of the network that indicates where the servers or other devices like storage or printers are attached physically to the network. For example, the topology in the image below maps out how the router and switches connect all the devices on the network using IP addresses. For anyone interested in data center administration, understanding a network topology is crucial, as well as being a good reference for proper network maintenance and for troubleshooting issues. 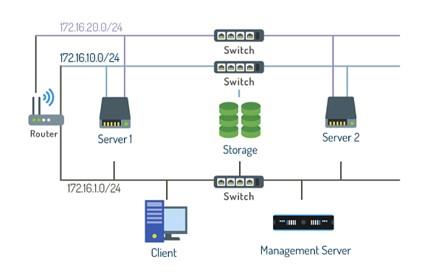