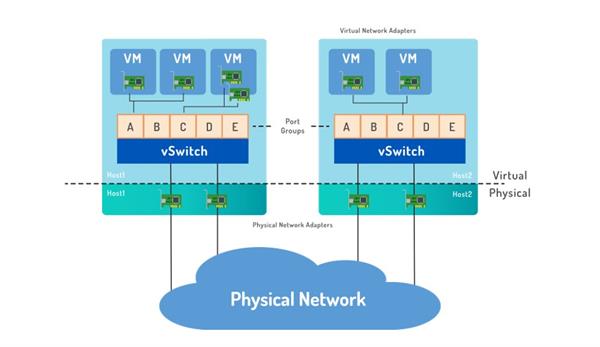 Virtual switches allow virtual machines on the same ESXi server host to communicate with each other using the same protocols that would be used over physical switches, without the need for additional networking hardware. A virtual machine can be configured with one or more virtual Network Interface Cards (NIC), also referred to as virtual Ethernet adapters. Each virtual NIC responds to the standard Ethernet protocol as would a physical NIC and has its own IP address and MAC address. As a result, virtual machines have the same properties as physical machines from a networking standpoint.

MAC (Media Access Control) addresses are assigned to NICs in order to communicate at a lower layer of the network, the data link layer of the OSI (Open Systems Intercommunication) model.

Another advantage of using virtual networks is the ability to establish VLANs. A VLAN, short for a virtual local area network, enables a single physical LAN (local area network) to be further segmented so that groups of ports are isolated from one another as if they were on physically different network segments. VLANs can be used to break up very large LANs into smaller virtual LANs. This may be useful to control network traffic such as broadcasts (another name often used for a VLAN is a Broadcast Domain). A broadcast is a method of sending data packets to every device on a network, like sending a text message to every contact on your cell phone. Broadcasts are commonly used by a router to request information about devices on the network or when a new computer is added to the network as a way to “get attention” to let other computers and devices know it’s there.

Although broadcasts save time, there are cases where some messages might not be intended to be read by particular recipients either for security or because they are not relevant to that recipient. For example, in a business or enterprise, it makes sense to split up a network by departments because each department would be able to communicate on its own network without interfering with the network communication of other departments. This results in the end users taking up less bandwidth and processor time. Also, without VLANs, each broadcast domain would need its own physical switch. Imagine the cabling involved and also the potential number of NICs required at the hosts. 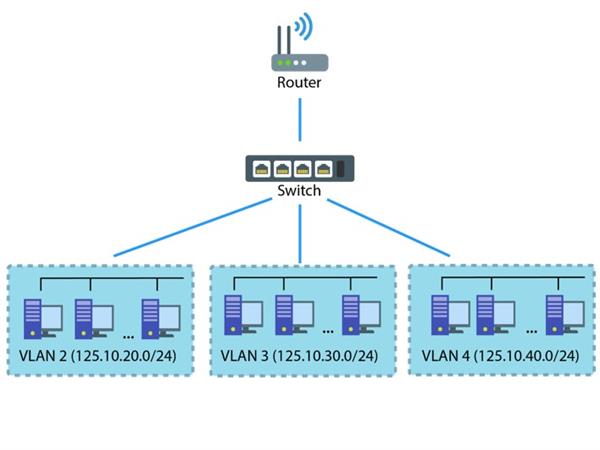 ⁠⁠​As shown in the image above, each VLAN is a virtual subgroup of the physical network. This is also indicated by the difference in the IP addresses of each VLAN. The virtual machines connected to the VLAN2, for instance, would use 125.10.20.255 to broadcast messages whereas VMs on VLAN 4 would use 125.10.40.255.