What is ESXi in VMware Virtualization Concepts ?

What is ESXi in VMware Virtualization Concepts ? 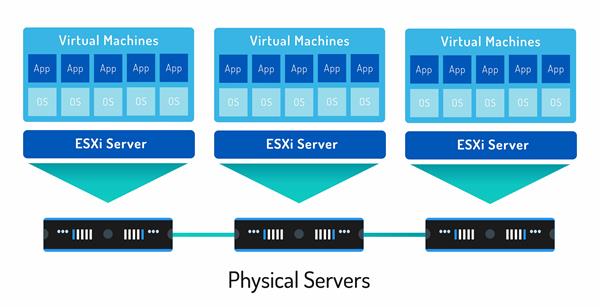 A diagram is shown depicting the ESXi structure. At the bottom of the image are three servers labeled “Physical Servers” with a square graphic above each server. The bottom layer of the square graphics shows a layer labeled “ESXi Server” with a layer above that labeled “Virtual Machines” that includes squares inside representing the OS and Apps.

When trying to get a big picture understanding of what makes up vSphere, three components should come to mind: vCenter (the management server), vSphere Client (the user interface), and ESXi (the hypervisor). Because ESXi is the foundation of vSphere, this section will focus entirely on ESXi, its role in vSphere as well as its architecture.

ESXi is Type 1 hypervisor software that is installed directly onto a physical server and creates the foundation for the virtual layer. ESXi enables the server hardware to be partitioned into multiple logical computers, which you now know are virtual machines. Another way to put this is that virtual machines run on and consume resources from ESXi, but ESXi is running on top of the physical server itself to help administer the hardware resources. ESXi is like a command center that all the applications on the VM talk to, then it turns around and tells the hardware what to do.

ESXi is also like an operating system in the sense that it provides everything needed to run the server and also to virtualize other systems on top of it.

When the server is turned on, the Unix microkernel starts up the computer’s most basic functions. It is called a microkernel because only the parts of the Unix OS that are needed to run the computer’s basic functions and hardware are included in the microkernel, rather than an entire OS. The reason a microkernel is a more efficient option for a hypervisor, as opposed to a full OS, is because it uses less software and therefore, more space and processing power are available for virtualization tasks. The most important basic computing function that the microkernel performs is an inter-process communication (IPC), a system that allows processes, which are basically programs, to send messages to each other. This is a critical function because an OS is actually a multitude of small programs that make up the OS as a software package, and these programs need to communicate to build “the package”.

After the Unix microkernel loads, the VMware kernel begins loading. The VMware kernel, also referred to as VMkernel, contains the code that makes the virtualization work. VMkernel is operating system software developed by VMware that provides similar functionalities to those found in other operating systems, such as program creation, signals for communication, a file system, and scheduling of what actions the processor needs to take to carry out the program instructions. Once the VMware kernel is loaded, virtual operating systems load up on top of ESXi and then the applications are loaded above.

To connect directly to the host, you will use the vSphere Host Client which is covered in more detail in a later section.

The VMware kernel is called a POSIX-like OS (Portable Operating System Interface for uni-X). This is based on standards established by the IEEE Computer Society to ensure compatibility between operating systems. The IEEE Computer Society, short for the Institute of Electrical and Electronics Engineers, is an association of computing professionals who have adopted a mission to advance the field and utilization of computer science and technology.

As the foundation of vSphere, ESXi supports the entire VMware Infrastructure suite of products. These products include but are not limited to the VMware Virtual Machine File System (VMFS), Virtual SMP (a tool that allows a VM to use two processors), and Virtual Center. Additional virtual storage solutions include VMotion, VMware Distributed Resource Scheduler, VMware High Availability, VMware Update Manager, and VMware Consolidated Backup.