What is Network Attached Storage in Virtualization Concepts? 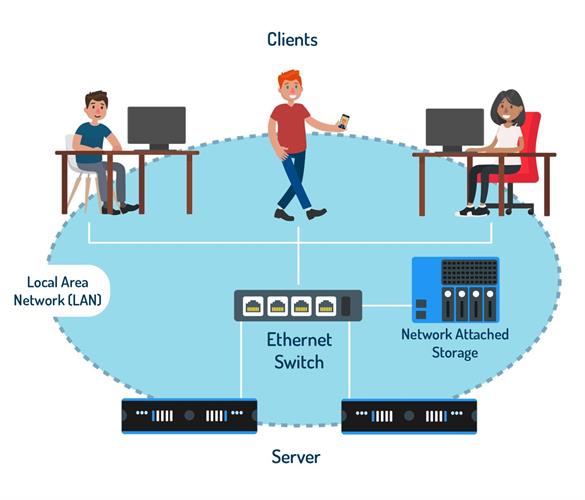 One downside of using DAS is that the extra storage can only be used by the server it's attached to. In settings where people need to be able to share stored data without needing to request it from someone else (by email, for example), DAS may not be the best option. In this situation, sharable storage would be more beneficial.

NAS, short for Network Attached Storage, involves attaching a storage device to a network that, in turn, allows storage to be accessed and distributed on the network to servers attached to the same network. The NAS storage normally connects to the network through an Ethernet protocol and has its own IP address. This is why NAS is sometimes referred to as a “personal cloud” because data traffic travels through the network to a secure location in separate but shared storage. Cloud storage, which is a way to store files and data on the internet, is essentially a large NAS, managed by someone else, to which you have access

in terms of feasibility, NAS is the easiest to use because it is file-level storage.

The protocols used for transmitting data over a NAS differ from those used for DAS because the storage is a type of file-level rather than block-level storage. NAS is connected to a router and/or switch, which connects it to a Local Area Network (LAN). To communicate to servers on the LAN, the storage uses a TCP/IP (Transmission Control Protocol/Internet Protocol), which is the basic internet protocol, or language data is transmitted through the internet.

Because the data shared on a NAS is in files, any system trying to access data needs to follow a file path. For example, /mystoragedevice/Public/mydata/file1.txt is how a server would get to file1 in the mydata folder on the storage device called mystoragedevice.

Because files are shared on a network, it is not enough to just connect the device to the network; the file system also needs to follow a network protocol to be accessed. For example, on the internet, HTTP is a protocol and usually comes before a web address. Without using http://, the website will not come up. This is usually filled in for you by the browser if you forget, but if you look at the address bar, it will be there. Files on a network are like websites; the correct protocol and file path must be used in order to access them. Commonly used file system protocols used on NAS devices are NFS (Network File System) and CIFS (Common Internet File System). NFS is commonly used with Linux and Unix-based operating systems while CIFS is used for file sharing on Microsoft-based machines.