What is File Level and Block Level Storage in Virtualization Concepts?

In block-level storage, a storage device such as a hard disk drive (HDD) is identified as something called a storage volume. A storage volume can be treated as an individual drive, a “block”. This gives a server's operating system the ability to have access to the raw storage sections. The storage blocks can be modified by an administrator, adding more capacity when necessary, which makes block storage fast, flexible, and reliable.
Note: Depending on the operating system used, storage volumes may be referred to with a different name. For example, Linux refers to storage volumes as physical volumes.

File-level storage is a type of storage that has a file system installed directly onto it where the storage volumes appear as a hierarchy of files to the server, rather than blocks. This is different from block type storage, which doesn't have a default file system and needs to have an administrator create one in order for non-administrator users to navigate and find data. 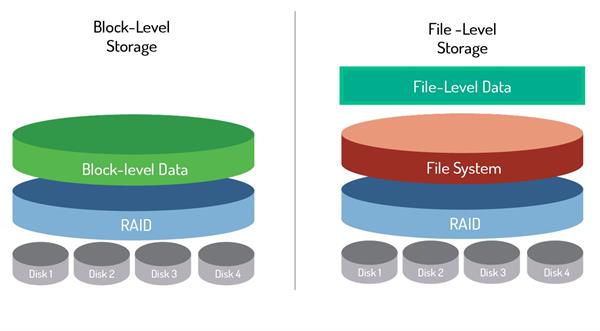 One benefit of using file storage is that it is easier to use. Most people are familiar with file system navigation as opposed to storage volumes found in block-level storage, where more knowledge about partitioning is required to create volumes.

Partitioning is the creation of sections on a disk that are set aside for certain files or software. Based on the operating system used, the partitions will be assigned a name or letter. For example, the letter C: is given to the main partition on Windows devices. This may seem familiar as most PCs purchased from a store have pre-configured hard drives with default partitions. However, for block storage devices purchased on their own, the user will most likely need to partition the drive before a file system can be installed as they do not come pre-configured with default partitions.