What is Direct Attached Storage in Virtualization Concepts? 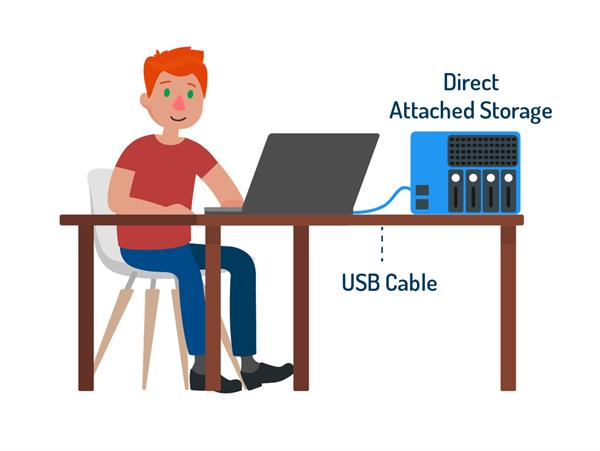 The following are types of storage that can be used as DAS:

The types of storage mentioned above have different benefits, but each has the ability to store data and can be used as an external storage option. The direct-attached storage architecture is beneficial for personal use or for small businesses that need to purchase a set amount of data storage at a time, and it is simple enough not to need a significant IT management presence. The goal is to grow data storage in increments by simply adding additional drives when needed.

One of the caveats of adding more storage is that there are a lot of different brands and builds of storage devices, and they need to be compatible with the computing systems that are accessing them. In order to set up DAS, the storage device needs to have the correct technology employed so it can speak the same language as the server it’s attached to. This "language" is called a protocol. On a storage device, the protocol can be identified by the ports and outlets it uses. An example would be the USB (Universal Serial Bus) protocol, which can be identified by the USB ports and cables. Because storage devices come in various protocols, the server may need an adapter to communicate with the storage device so users can store and access data from it.

The protocol adapter for servers is called an HBA (host bus adapter). This is a piece of hardware, similar in appearance to a card with a port for a plug, which is plugged into a server and adapts the server to the storage device’s protocol (language). Once the HBA is attached to the server, and the cables with the right protocol are used, a storage device can be attached, allowing the DAS to now be able to talk to the server. The protocols most commonly used for DAS are SCSI, SATA, SAS, and USB. So, if a SCSI protocol HBA is attached to the server, and the HBA is connected to a SCSI storage device with cables, it will be able to transmit data from the server to the storage and vice versa.

Note: Protocols will be covered in greater detail later in this chapter.