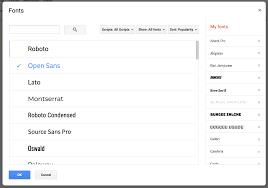 Learn About the Best Fonts Available on Google Docs

Which are the best fonts available on Google Docs?

You can pick a wide variety of fonts from the Google fonts library to make your article or resume to convert your ordinary-looking document into an attractive-looking document so that people will be more likely to read your document. In this article, I will tell you about some of the classic and underrated fonts available in Google. So, let's begin.

Following are the different fonts available on Google docs.

It is a well-known public type font and is known as an open-source font with a libre license. It has been used by at least 428 billion to date, with more than 95 billion uses in the last year alone. The Font created by the Russian design agency ParaType is one of the most widely used online types. Latin and Cyrillic letters are included. One of the biggest advantages of this font is that they come in four different styles.

Raleway, which was created by a team of designers, is leveraged by over 457 billion people throughout the entire globe. This font was used by over 142 billion people in the previous year. In comparison to 2017, this is a 14 percent gain. Raleway font can be found on over 8 million websites. 18 different styles are available to choose from.

It has been used by around 591 billion people to the date of existence, and if that isn't remarkable enough, consider the 226 billion users it received in the previous year. That's a stunning 40 percent higher. This font is unquestionably one of the most appealing.

This is a scaled-down version of the popular Roboto font. There are just six styles in all. Regardless, it is highly common. It is ranked 6th in the top 10 over the past year, from January 29, 2018, to January 29, 2019. Christian Robertson, the designer of the original Roboto is also responsible for the creation of this version. The curves in this font are pleasant and open. With a mechanical skeleton, the forms are mostly geometrical.

Merriweather is one of my favorite Google fonts. It's a free, open-source serif font that comes in a variety of weights and styles that you may use in Google Docs to make it look attractive. It also includes a unique collection of Glyphs.

Step 1. Visit the Google docs app and tap on the document where you want to add a font.

Step 2. Tap on "More Fonts" in the top toolbar — this will redirect you to a pop-up window to appear.

Step 3. After this, you'll find a list of fonts, pick the font you want to add from the left column and hit "Ok" when done. That's it now you'll find your preferred font added to your document.