As it is already known, that virtualization has been started in 1960. But it becomes a staple with the advent of cloud computing. To optimize the cost of Operating system and improve in the efficiency of infrastructure’s services, it is rapidly use in cloud computing. It allows running multiple operating system and applications on a single server which is logically separated. It is the process to create a different virtual environment which performs different tasks without interrupting each other on a single server. It can be a single instance or combination of networks. The main benefits of virtualization are as follows:

There is a firmware available known as Hypervisor which is responsible for interaction between virtual machine and host machine or with server. Figure 1 represents the scenario of virtualization. 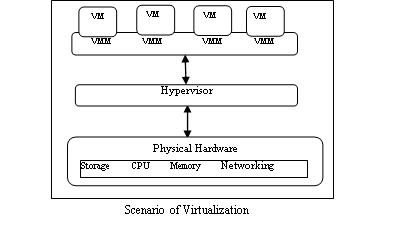 Different types of virtualization are available and are shown in figure. It is quite difficult to say that which one is better and which one in worse. It totally depends upon the usage of resources, type of computing task and operating system.

Full Virtualization: In this virtualization, the guest operating system doesn’t require any modifications, because hardware is simulated.

Para Virtualization: The guest operating system requires modification because hardware is not simulated.

Software Virtualization: It creates multiple virtual environments on a single machine. For example, android is running on windows machine and .net is also running on same machine, it is known as software virtualization.

Memory Virtualization:   For providing shared, distributed and network function, memory virtualization introduced by decoupling memory from server. It is directly related to end user and focused on application performance. It plays an important role in strategic decisions for any enterprises. It provides different storage resources build on a single storage device is known as storage virtualization. It has the capability to use resources more efficiently. It is actually required in both environment cloud as well as virtual. Generally, it is of two types: Block: It takes place at disk level before the file system exists. File: For file level usage, software must be installed on it.

Data Virtualization: Without any efforts, the user can easily manipulate the data. Users can easily scale up and scale down data storage as when they needed. It decreases the workload and data errors.

Network Virtualization: It is defined as the ability to create virtual network having decoupled from underlying network hardware. It ensures the integrate network that can provide better support in virtual environment. It also intends to provide network optimization for different parameters like security, reliability and flexibility etc.

Desktop Virtualization: It is the process to isolate instance of logical operating system from client which is used to access it. It also provides flexibility to users by accessing data of PC from any location. It also supports security of the data.

All types of virtualization depict that it is an easy way to create the virtual server in cloud so that provider and users don’t have to manage so many things. It keeps the data and can be admittance from everywhere. Therefore, it increases the productivity, efficiency, security and decreases the cost and overhead of provider.