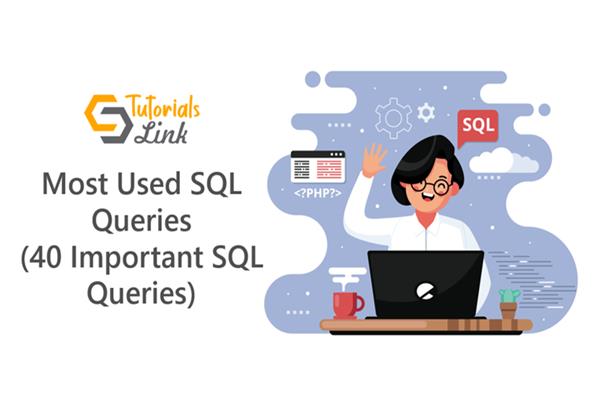 SQL stands for Structured Query Language. It is a standardized language for accessing and manipulating the data in the relational databases. It involves querying the databases using SQL statements which involve elements of SQL like commands, clauses, constraints, functions, operators, procedures, etc. Among these elements, commands play a significant role in the language because they are the instructions that enable us to communicate with the database in order to perform certain operations. Here’s an appendix of commonly used commands in SQL.

AND is an operator which is commonly used in SQL commands to filter the records on the basis of ANDing conditions (where all the conditions have to be true).

ALTER TABLE command allows us to modify the structure of the table. It enables us to add columns to the table after the table is already created.

BACKUP DATABASE command is used to back up the entire database to the path that has been mentioned in the query.

BETWEEN is an operator that is used to select a range of values from the table.

COUNT() is an aggregate function that takes a column name as an argument and returns the number of rows that satisfy the specified criteria.

CREATE TABLE command is used to create tables in databases. It allows us to specify the column names and their types inside the brackets.

DELETE command is used to remove records from the table. It will remove all the records unless the where clause is added and after that, the deletion is restricted to a particular row.

DROP TABLE command is used to delete the entire table. When we use this command, the entire information is lost. It can even be used to drop a database.

GROUP BY command is used with aggregate functions to group the records on the basis of one or more columns.

INSERT command is used to insert records into the table after the table is already created. We cannot use a WHERE clause in the statement which has INSERT command. The values inside the second bracket have to be in the same order as previously specified in the first bracket which contains the column names.

JOIN command is used to join the related data from two or more tables. There are many types of JOIN that work differently.

LIKE command is used to return records with a specified pattern in a column of a table. There are two wildcards used in conjunction with the LIKE operator

ORDER BY command is used to sort the records on the basis of a particular column specified in the query. The records can be sorted in ascending or descending order depending upon the keyword ASC or DESC respectively.

MAX() is an aggregate function that is used to return the largest value among the selected column of the table.

MIN() is an aggregate function that is used to return the smallest value among the selected column of the table.

NOT is an operator that is used to filter the records on the basis of the conditions such that the condition is not true.

SELECT command is used to retrieve tables from the databases. Asterisk implies selecting all the columns from the table. We can even specify the columns to be displayed in the table. This can be done by providing the column names instead of the asterisk(*).

SUM() is an aggregate function that is used to return the sum of a numeric column specified as an argument to the function.

TOP is a clause that requires us to pass a number with it. This clause returns the top records from a specified column which satisfy the given condition. The number of top records returned is decided according to the number specified in the query.

UNION is an operator that is used to combine rows from two or more statements. Unlike the JOIN command which only returns the matching records, the UNION operator is used to append unrelated records.

UPDATE is a DML command which is used to modify a particular value after the records are already inserted into the table. This command requires us to firstly mention the column name that has to be updated with the value with which it should be updated. Secondly, we have to mention the column_name and the previous value (before updation) in the WHERE clause. We can even use AND/OR operators inside the WHERE clause in this command.

USE command is used to select the database specified in the query so that operations can be performed on the corresponding database.