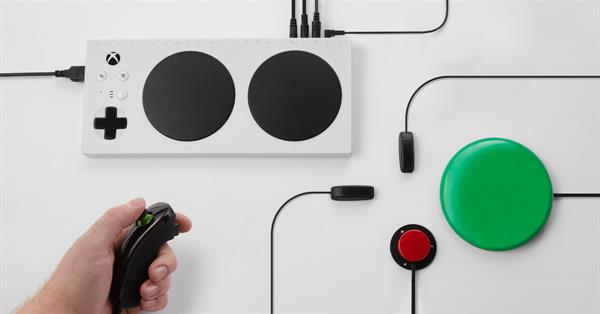 Microsoft has announced the Xbox Adaptive Controller, an Xbox controller designed for people with disabilities.  It has two large programmable buttons and 19 jacks that can be connected to a range of joysticks, buttons, and switches to make it easier for a wider range of people to play games on Xbox One and Windows 10 PCs.

The focus is on connectivity and customizability, with players able to built a setup that works for their capabilities and needs. It won’t be an all-in-one solution for many games, but through the use of peripherals and the Xbox's system-level button remapping, the possibilities could be endless.

The Xbox Adaptive Controller will cost $99.99 and goes on sale later this year.

“I can customize how I interface with the Xbox Adaptive Controller to whatever I want,” told Solomon Romney, a Microsoft Store employee who was born without fingers on his left hand. “If I want to play a game entirely with my feet, I can. I can make the controls fit my body, my desires, and I can change them anytime I want. You plug in whatever you want and go. It takes virtually no time to set it up and use it. It could not be simpler.”