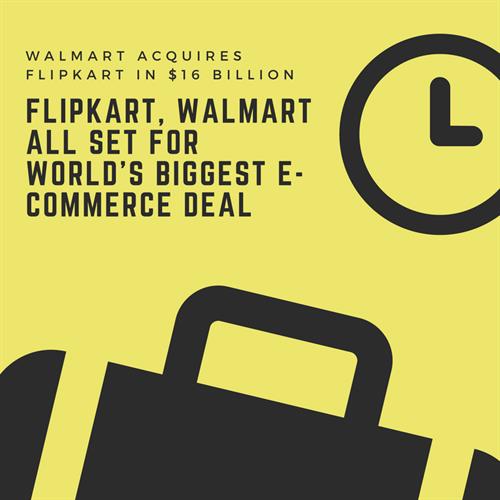 Know why traders are holding protest against Flipkart – Walmart deal

Jul 06, 2018 business , acquisition , 3803 Views
E-commerce market place has been vitiated to a great extent in past years by several leading e-commerce companies by indulging into all kinds of malpractices including predatory pricing, deep discounting and loss funding.

In a mark of opposition to the $16-billion Walmart-Flipkart deal, nearly 10 lakh traders on Monday are holding a protest at about 1,000 places across the country. The Confederation of All India Traders (CAIT), the largest traders’ body in the country said the US retail giant’s buyout of Bengaluru-based Flipkart will create a monopoly in the retail market and drive small store-owners out of business. Walmart acquired a 77 percent stake in home-grown retailer Flipkart earlier this year.

Praveen Khandelwal, the secretary-general of CAIT said in an interview  “This is the first phase of our protest. And if the government doesn’t listen, we will decide our future course of action at our national convention in Delhi later this month,” He has previously said  that the "e-commerce marketplace has been vitiated to a great extent in past years by several leading e-commerce companies by indulging into all kinds of malpractices including predatory pricing, deep discounting and loss funding".

According to Khandelwal, CAIT has already filed its objections in the Competition Commission of India and if the need arises it shall challenge the deal in the court of law. "We have been expecting the government to reject this deal, but so far, we haven't heard from them ... We will fight this deal tooth and nail, and, if necessary, take this matter to the Supreme Court".Also added  "We expect the government to intervene and take suitable action in accordance with various announcements of Prime Minister Narendra Modi to uplift small businesses in the country. This deal will directly affect small traders of the country who will not be able to compete with Walmart".

On the other side, Walmart said “Walmart is operating and contributing to the Indian economy for many years now. Through our B2B business (Wholesale cash-and-carry) in India, we are not only supporting lakhs of small kiranas succeed, but also helping them modernize. Our continued efforts have been to support domestic manufacturing in India by sourcing locally from SME suppliers, small farmers & Women-Owned Businesses. A clear testament of that is showcased in our merchandise 95% of which come from within the country,”