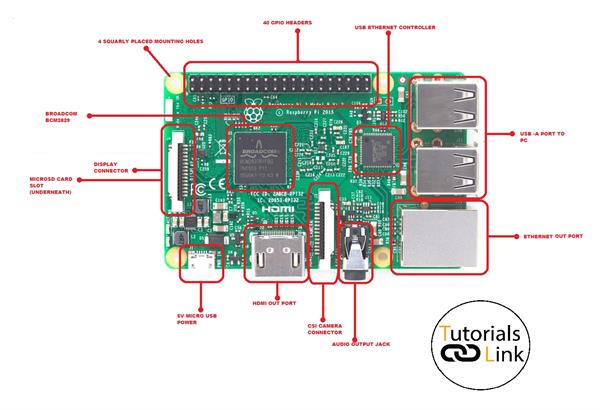 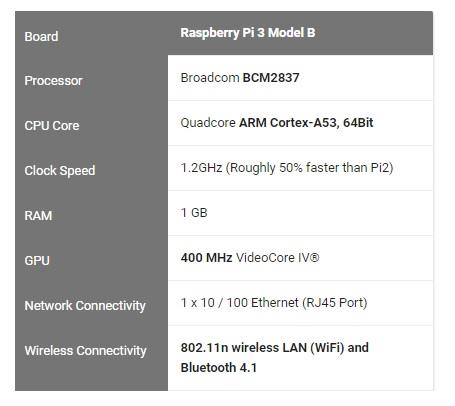 Specifications of the Raspberry Pi 3:

Raspberry Pi has 4 USB ports for connecting external devices such as pendrives, mouse and keyboard etc.

40 GPIO pins are general purpose input output pins that is used to take input and output from different sensors and devices we will discuss about this in brief later.

Ethernet port is provided for connecting internet via LAN port in Raspberry Pi.

CSI port is provided to connect camera to Raspberry Pi for image processing and other stuff.

USB Ethernet controller chip is used to manage connection and route the connection via Ethernet.

Mount holes are holes provided on every corner of Raspberry Pi to fit in different covers available in markets. 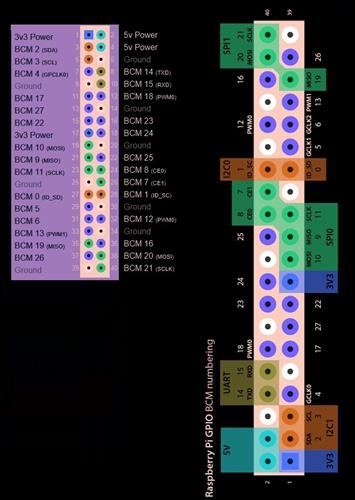 Pins differ from board to board; different boards can have different pin configuration and number of pins.

GPIO pins or general-purpose input/output pins are one of reason for popularity of single board computers.

Types of Pins in Raspberry Pi:

GPIO pins can be used in two ways:

·       For taking input from different input sensors like LDR

As the name itself define its use, they are general purpose pins which enables the user to configure it and use it accordingly.

Power Pins are pins that provide 5V power that can be used to power different devices or sensors.

Universal Asynchronous Receiver Transmitter is a set of communication pins provided in Raspberry Pi for sending and receiving data wired or wirelessly.

UART include set of two pins are RX and TX which are used for receiving and transmitting data serially respectively.

2C is a multi-master bus, which means that multiple chips can be connected to the same bus and each one can act as a master by initiating a data transfer. I2C is a very commonly used standard designed to allow one chip to talk to another. So, since the Raspberry Pi can talk I2C we can connect it to a variety of I2C capable chips and modules.

SPI pins are pins that enables Raspberry Pi to communicate with other microcontrollers and device.

SPI and I2C do the same function but SPI have a single master which control all slaves clock in the bus on the other hand I2C can have number of masters.