What is Distributed Switch ? 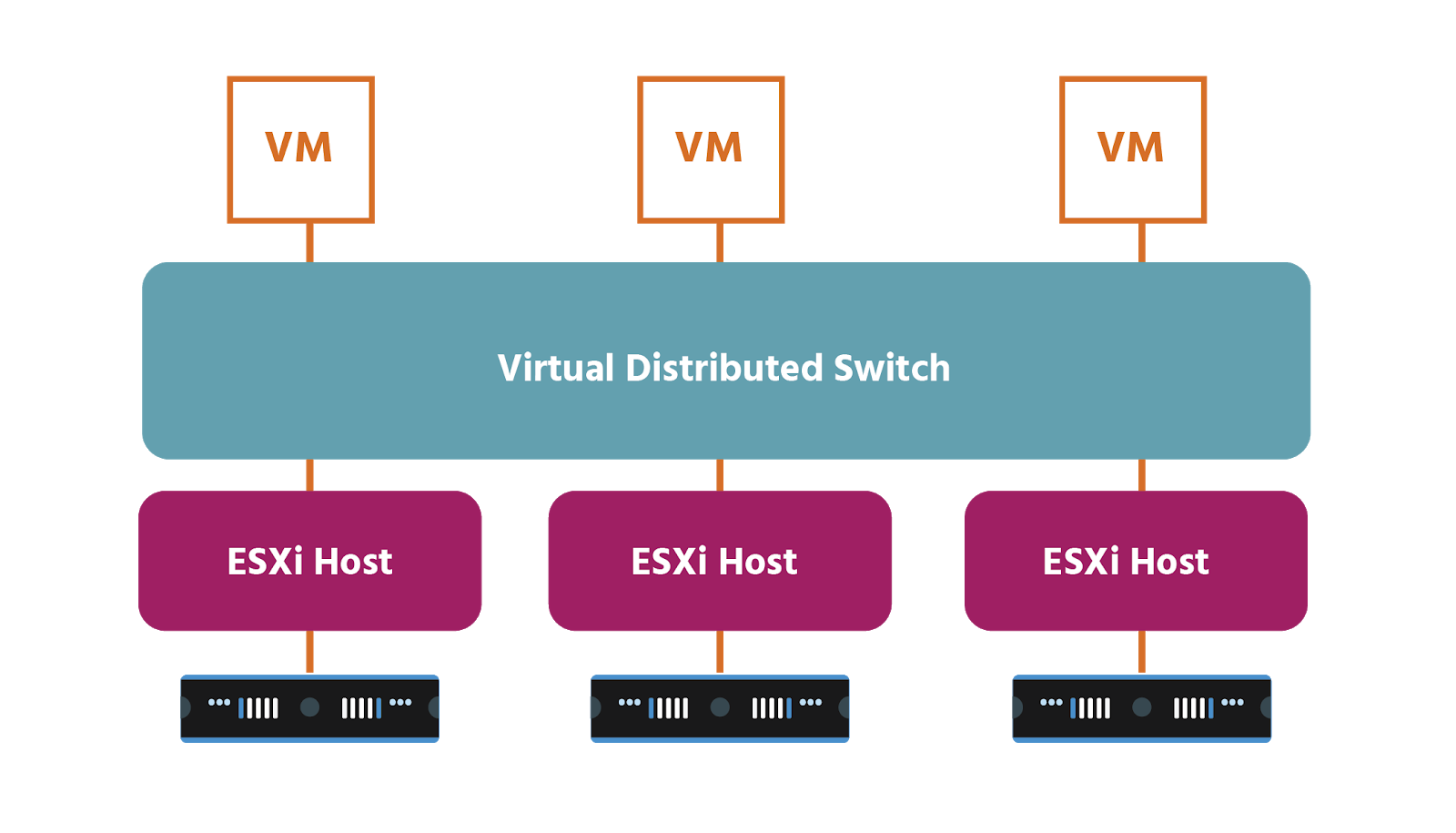 A vSphere Distributed Switch (or vDS) acts as a single switch across all associated hosts in a data center and provides centralized provisioning, administration, and monitoring of virtual networks. You configure a vDS on the vCenter Server Appliance (vCSA), and the same settings are then added to all ESXi hosts that are associated with the switch. This lets virtual machines maintain consistent network configuration as they move (or migrate) from one host to another. Each vCenter Server system can support up to 128 vDSs, and each vDS can manage up to 2000 hosts. Each vDS can also support up to 10,000 port groups.

A vDS uses the physical NIC's of the ESXi host on which the VMs are running to connect them to the external network.

With a vDS, policies can be set for each individual port, not just for whole port groups. You can also block all ports in a distributed port group (though this might disrupt the normal network operations of the hosts or virtual machines using the ports).

Whereas a standard switch contains both data and management planes, and an administrator configures and maintains each switch individually, a vDS eases this management burden by treating the network as a pooled resource. Individual vSwitches are abstracted into one large vDS spanning multiple hosts across the data center. The data plane remains local to each vDS, but the management plane (the vCenter Server in this case) is centralized, which streamlines and simplifies VM network configuration. The vDS also provides enhanced network monitoring and troubleshooting capabilities, including templates to enable backup and restore for virtual networking configuration.

The data plane section of the vDS is called a host proxy switch. The networking configuration that you create on a vCenter Server Appliance (the management plane) is automatically pushed down to all proxy switches (the data plane). Proxy switches support:

NSX-V requires the use of vDS. NSX licensing entitles customers to the vDS. NSX-T comes with its own vDS type: the N-VDS, or NSX Managed Virtual Distributed Switch. As we’ll see later in the course, NSX-T can be deployed without a vCenter server. This means that an N-VDS switch is similarly not dependent on vCenter (as a vDS is) and can be used in a variety of cloud environments. It can provide network services to VMs running on both ESXi hypervisors and KVM hypervisors (which are built into Linux kernels).

Multiple N-VDSs and vDSs can coexist on a transport node; however, a physical NIC can only be associated with a single N-VDS or vDS. 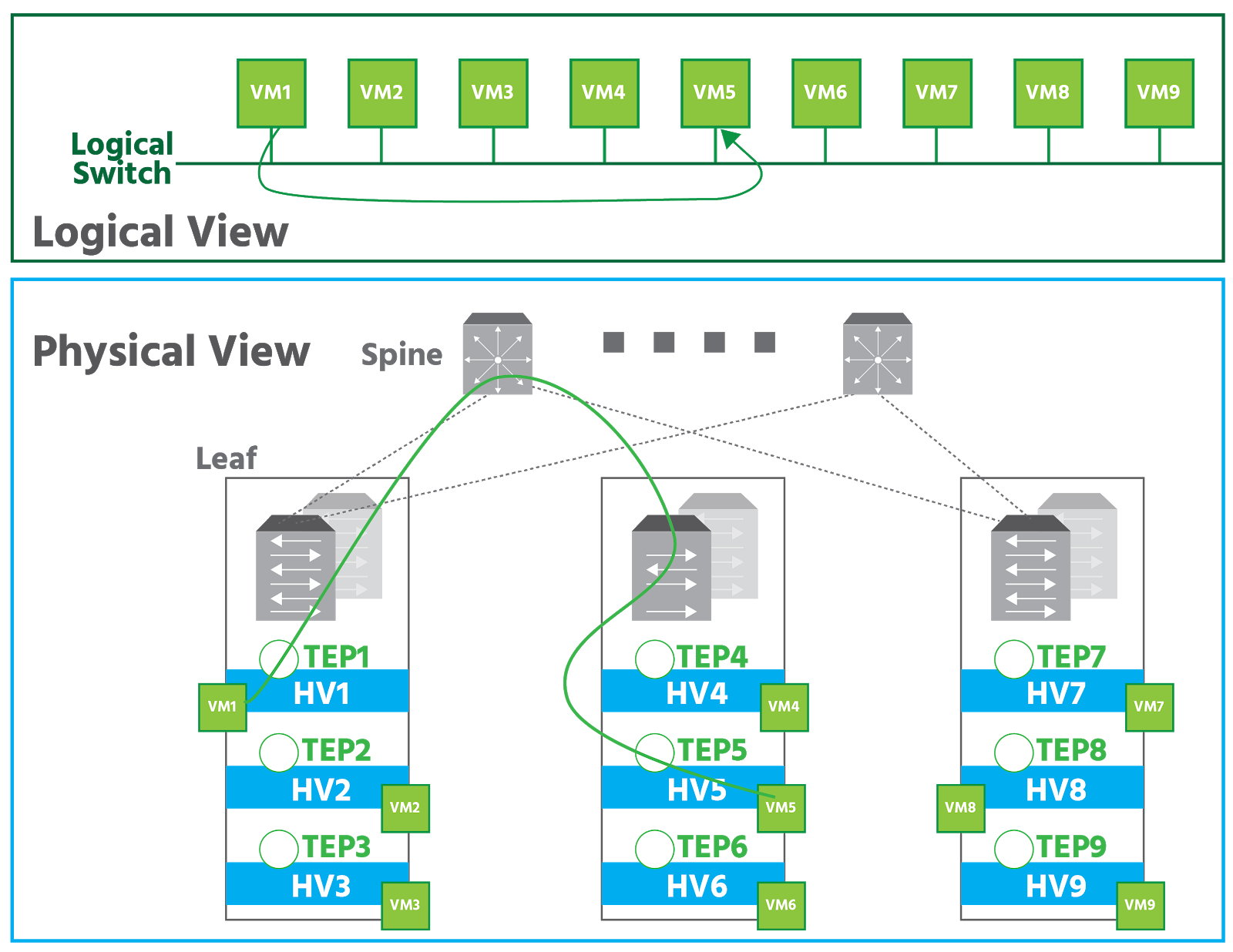 In the upper part of the diagram above, the logical view consists of eight virtual machines that are attached to the same logical switch, forming a virtual broadcast domain. The physical representation, at the bottom, shows that the five virtual machines are running on hypervisors spread across three racks in a data center. Each hypervisor is an NSX-T transport node equipped with a tunnel endpoint (TEP). The TEPs are configured with IP addresses, and the physical network infrastructure provides IP connectivity between them. An NSX Controller (which we’ll discuss later in the course) distributes the IP addresses of the TEPs so they can set up tunnels with their peers. The example shows VM1 sending a frame to VM5. In the physical representation, this frame is transported via a tunnel between transport node HV1 to transport node HV5.

STM32H743VIT6 Microcontroller: 480MHz, 100-LQFP, Pinout and Datasheet
STM32F446RET6 Microcontroller: 180MHz,64-LQFP, Pinout and Features
What is Key Components of NSX-T
What is Bringing Network Virtualization to the SDDC
What is NSX Data Center?
What is Edge Firewall and NSX Logical Firewall?
What is Virtual Private Network (VPN)? L2 L3 VPN
What is Load Balancing in Networking?