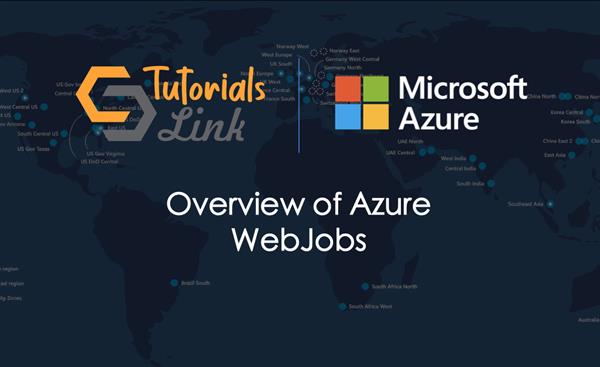 Sep 03, 2019 Azure, Azure WebJobs, 751 Views
In this article, we have to learn the overview of Azure WebJobs and its services.

Before we start with the understanding of what is Azure WebJobs, we should know–

In this article, we will explore what is Microsoft Azure WebJobs but before we look into it, let’s understand -

Nowadays their numerous software application is deployed to automate the business processes. It is a very common scenario that we need to run a background job at once or periodically to perform some tasks at the backend. This background job can be anything like sending emails in bulk, execute some calculations, review the approval tasks, etc.

The name its self-understandable, it is a job which runs at the background. It enables us to run a program or script in the same context as a web app, API app, or mobile app. Azure WebJobs helps us to execute the business logic at the backend continuously or recurrently or on-demand (event-driven).

It is coming under the platform as a service and feature of app services. Since it runs in the context of apps, it has no additional cost to use the Aure WebJobs. If you still want to separate configuration for Azure WebJob that’s also possible.

Azure WebJob accepts the below formats as a runnable script –

There are two types of Azure WebJobs-

It started immediately after creating the Azure WebJob. It has support for the remote debugging. It has a live instance all the time.

As the name explains, it starts executing on specific triggers or on a schedule. It doesn’t support the remote debugging.

Azure Web app can time out after 20 minutes of inactivity. If our app runs continuous or scheduled, then make sure to enable the Always ON setting of Azure WebJob.

To monitor the Azure WebJob, it has the facility to run the history of every job instance using the portal. Even we can plug-in application insight feature to the Azure WebJob to view the more logs.

Next – Get started with Azure WebJob SDK

Conclusion - In this article, we have learned the overview of Azure WebJobs and its services.