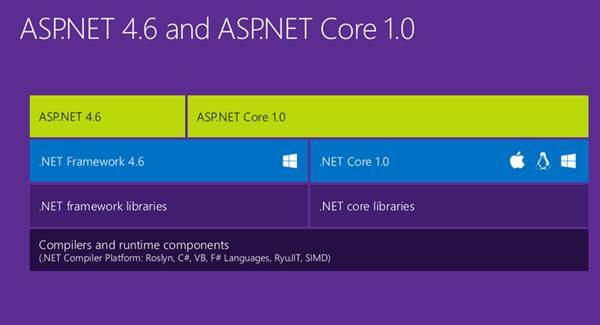 With 20% faster performance than .Net Core 1.X, core 2.0 is in the lime light. Optimizing to the core the .Net core 2.0 is the next big thing for the Microsoft Developers.
A modular framework uniting the MVC and Web API into a single programming Model running on .Net framework or .Net core run-time but can run on any platform. Highly flexible in deploying to cloud and since cross platform, the demand among the developers increases.

Asp.net Core libraries/dependencies are self-contained, most of the packages are downloaded from Nuget but can run on windows, linux & Mac whereas in Asp.Net the packages are self contained but can only run on windows.
Based on the .Net Core CLI (Command Line Interface) on which the IDE (Integrated Development Environment) relies on. It is the cross platform tool chain for developing .Net applications irrespective of the platform.
Visual Studio as IDE has support for running on Windows and MacOS. Visual studio code can be used as IDE on windows, MAC and Linux systems as well.
Directly .Net Core CLI can be used on the Command window to execute the .Net applications.

The latest of the Core versions now in the market. With the command line interface it is just few command away from creating a .Net Core 2.0 application. .Net core 2.0 now comes with the Entity framework 2.0. To start with the .Net Core 2.0, one just needs to download and install the .Net core 2.0 SDK
Creating a small and simple application using CLI

.Net Core 2.0 has a lot of performance improvements. One of the best improvements in .Net Core 2.0 is Razor Pages. Razor pages in .Net core 2.0 MVC projects are enabled by default using the services.AddMvc();
Now whats new in the integration of Razor Pages! In the Razor Pages now there is no direct coupling with the hard bound Controller we used to create and adding views to them and then routing through the controllers and Actions.
Now, we can directly create a folder and add a .cshtml page. For example,
We add a cshtml file named- "CoreTest.cshtml"

Here the routing would be "/CoreTest". Simple and Crisp! Interesting thing is the precious page route was /CoreTest, now it can be customized and rerouted to the customized route to suppose "/core-test".

Razor compilation is easier and is automatically compiled during the publishing of the package or the application.
MvcRazorCompileOnPublish is the property that is set to true by default. We can set it to false to avoid this auto compilation.

The .Net core 2.0 simplified the Program.cs class file as compared to the .Net Core 1.x.
For .Net Core 1.X

Now migrating a .Net Core 1.X project/application to .Net Core 2.0 is easy as well. We will cover the Migration Steps in the upcoming articles without letting down the scope of this article.

Lets create a MVC Web Application from Command Line
Using the command line interface we can create different types of dotnet applications without using the GUI. The commands to be used are:

There are many more interesting features introduced in .Net Core 2.0. We will be covering the features in detail in the upcoming articles.